ames may have developed in the backrooms and summerhouses of rich patrons in England, France and Italy (the word ‘casino’ itself comes from the Italian for ‘little house), but it’s the spas of southern Germany that took the first major step towards the creation of the modern casino. These early venues included Bad-Homburg, and the Casino Baden-Baden – the latter, in particular, remains one of Europe’s most glamorous locations, and was the place that inspired Dostoevsky to write his story of riches to rags, The Gambler. The idea was that you could spend a few weeks in peace and quiet, taking in the healing waters. As you did so, you could take in a few hands of cards, or spin a roulette wheel or two.

For most people, though, the opulent Riviera-setting of Monte Carlo (in Monaco) would seem to be the place that gave the world its first true taste of the modern experience. The brainchild of Maria Caroline, consort of the Prince of Monaco, the Monte Carlo casino (named after Charles, the son of the royal couple) was seen as a way of bringing in extra funds, and healing the financial problems that threatened to capsize the Grimaldis, the royal family of Monaco. 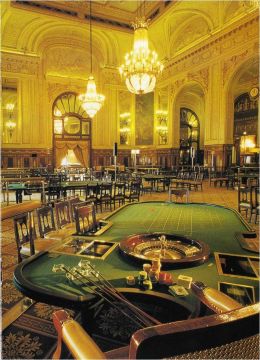 Also built around a spa, the original Monte Carlo took a long time to take off. A series of managers were tried and sacked before Princess Caroline eventually persuaded the manager of the Bad-Homburg casino, Jacques Blanc, to take over. He embarked on a massive reconstruction programme, and added a concert hall that brought in extra visitors. Stories of players like Joseph Jagger (the man who broke the bank at Monte Carlo) only served to make the casino more famous, and by the end of the century, it was established as the Monaco preserve of the rich and famous – although not Monaco citizens themselves, who are banned from even entering the building. Today, the casino retains its glamour (thanks partly to high stakes and a strict dress code), and continues to add huge amounts of money to the funds of the Grimaldis. It’s maybe not the place for hardened gamblers, or for slots enthusiasts. But for serious casino game players, it remains a must-visit.

Las Vegas was originally a sand-covered wasteland in the middle of the desert, but the creation of the huge Boulder Dam (billed as the ‘Eighth Wonder of the World’) brought huge numbers of workers (and, after its completion, visitors) to the area in the early 1930s. This coincided with the 1931 legalization of gambling in Vegas. A huge injection of money would be applied in the mid 40s, when the mob was introduced to the area by Benjamin (Bugsy) Siegel. He needed money to help develop the unfinished casino, the Flamingo, that he had just acquired. The man certainly had vision. The crowds, sadly, didn’t, and it took a few years for the idea of Las Vegas to take hold. A huge rainstorm that washed out the opening day of the Flamingo was unfortunate. But whether it was this, or cost overruns (Siegel had predicted it would cost a million to develop the Flamingo, but the eventual bill was six times this amount), or rumours that he was skimming money from the proceeds, Siegel was killed. Las Vegas, though, very much thrived, and became the playground of the rich and famous – particularly those in nearby Hollywood.

As a venue for gambling, drink and vice, Vegas ruled the roost through the 50s and 60s. Caesars Palace was typical of the time, and its Roman-themed architecture remains eye-catching even today. While Caesars is perhaps better known now as a sporting venue, it remains strong in gambling. Its two wings include one devoted to high stake players, while the other wing (the Olympic) caters for everyday gamblers. Many of these casinos became known for their gaudy neon-lit signs, and Fremont Street is plastered with classic icons of the time – low-stakes downtown outlets such as Binion’s and Four Queens. 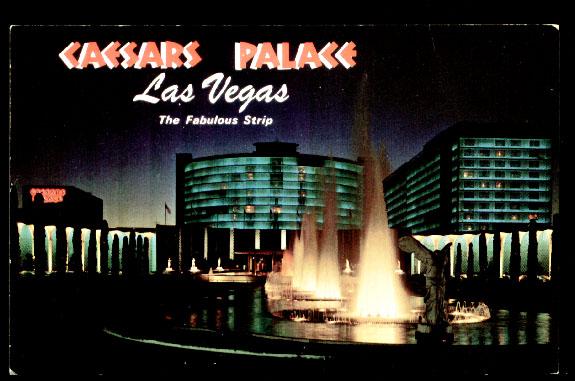 By the early 80s, Vegas seemed washed up. America was tightening its purse strings, and the mafia money had largely been chased out of the city. Even the 50s/60s neon lights now seemed tacky and dated, while crime was significant. What was needed was a grandiose project that could transform perceptions and bring in a completely new audience – affluent families looking for an interesting take on the annual holiday. By the end of the 80s, just such a project had been created, and the Steve Wynn-driven Mirage opened its doors in 1989. This giant spectacle included gigantic waterfalls, forest, and an erupting volcano. It also delivered great food, and nightly shows by the now world-famous magic duo, Siegfried and Roy.

With the Mirage (and other huge family-friendly buildings, such as the knights-themed Excalibur hotel) bringing fresh money into Vegas, gambling potential became huge again. The opening of the new MGM Grand (the original had burned down in a fire in 1981) created the largest casino in Vegas, offering 3,700 slots (some offering payouts of up to $500K) and 76 blackjack tables. Indeed, so much money could slosh through the tills that a fleet of almost 40 armoured cars spent two days transporting enough cash to fill the coffers. With four separate areas (each with its own theme), this remains a truly spectacular venue. Other 90s casinos included the Luxor and Monte Carlo – a replica of the Monaco-based glamour palace.

It was only at the end of the 90s, though, that Steve Wynn administered a new shot to the Vegas tourist market. Opening in 1998, the Bellagio aped the elegant opulence of the Italian Lake Como town from which it took its name. Decadent yet classy, this massive $1.6 billion project (the most expensive ever built) wasn’t quite as large as the MGM Grand – it contained a miserly 2,000 slot machines! – but it catered for the high rollers who wanted privacy. Its semi-secluded gambling areas and luxurious poker rooms (with pots frequently rising above $1 million!) became the perfect meeting places for the cash-soaked film stars who fuelled the celebrity gambling craze of the 2000s – and its famous fountain has been a mainstay of Vegas-set films ever since. 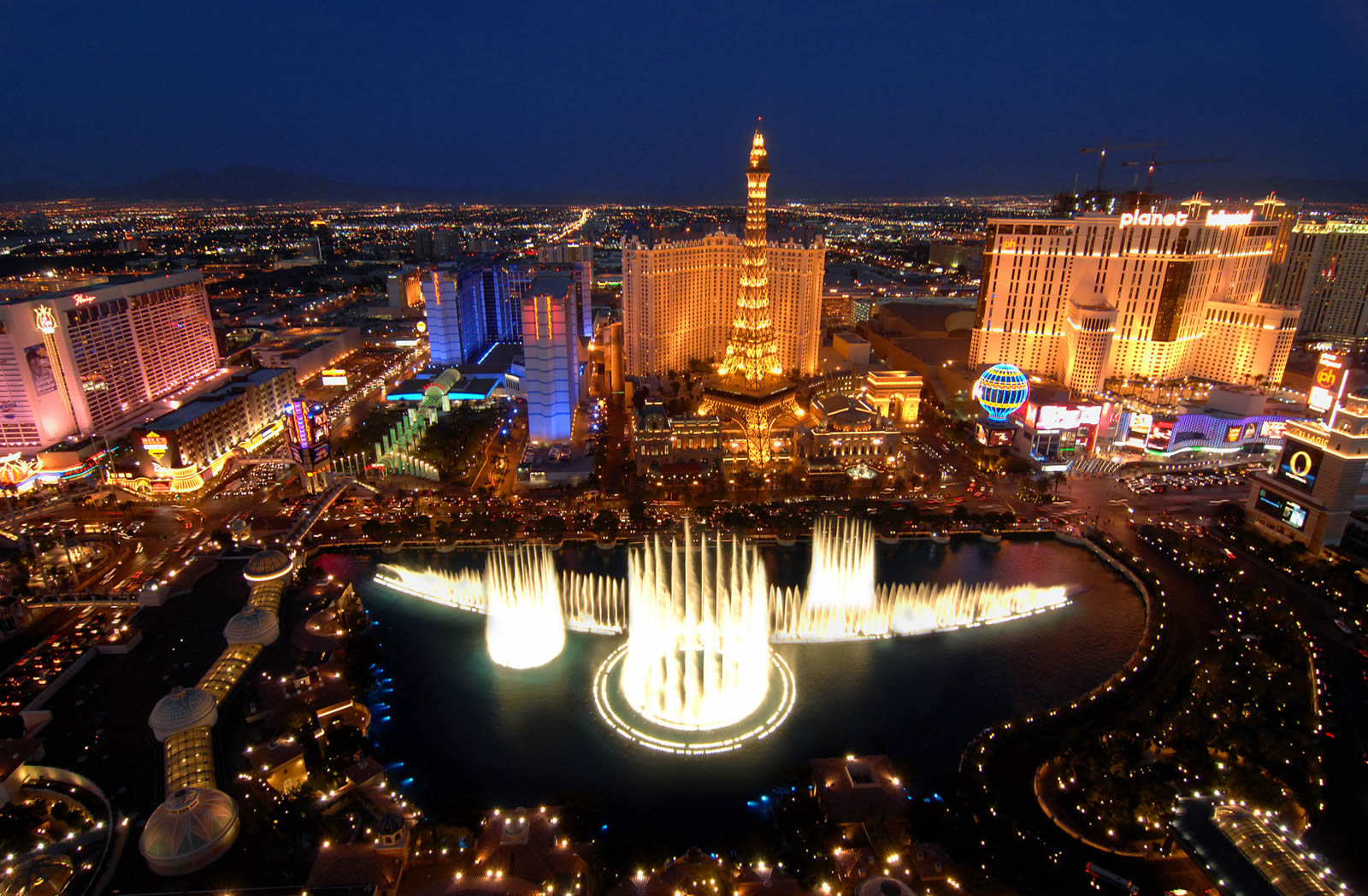 The hotel and casino, Mandalay Bay, opened in 1999. Its water-themed layout included a huge 11 acre pool area. It also offered a lot of room for gamblers, with its 2,400 slots making it the second largest behind the MGM. Rather than focusing on more traditional casino games, Mandalay Bay aimed for a large piece of the rising sportsbook market, and its 17 screen race and sports area now draws horse and sports punters in huge numbers. Another glamorous resort, the Venetian, was also opened in 1999, and features eye-catching interiors – complete with splendid frescoes on the ceiling. Crucially, for gamblers, it’s now home to the only 24-hour sportsbook in Vegas. The Cosomopolitan, opened in 2010, is one of the newer casinos, and has the glitzy lurid interior to suit. Another Wynn casino, this one called, quite simply, The Wynn, also offers considerable gambling space, with 111,000 square feet of tables and slots.

Of Las Vegas’s gambling revenue, around 50% comes from slot machines, with 45% coming from the more traditional table games. Despite the huge hype surrounding poker, little more than 2% of the overall revenue comes from this game. Vegas as always been synonymous with gambling. However, recent years have seen this becoming a less and less significant part of the overall cake. In the past, more than 60% of all revenue was generated through gambling. That portion has now fallen to under 40%, and it’s now the hotels, shows and shopping centres that bring in the majority of the cash.

It’s also worth remembering that Vegas isn’t the only place in the USA where you can gamble. Foxwoods, near New York and Boston, is actually the largest casino in America, with a gigantic 7,000 slots – almost twice as many as the MGM Grand, for example. Also, as the legalization of gambling across the USA grows apace, local competition is likely to see larger numbers of gamblers staying close to home rather than making frequent trips to Vegas. The state of Kansas, for instance, legalized gambling in 2007. In one year alone (from 2011 to 2012), gambling revenues have rocketed from $48 million to $341 million in 2012 – almost a 604% increase! For many, Vegas may seem to be the epitome of gambling. But its future is far from certain.

The New Supergiants – Macao and Singapore

Vegas’ big overseas rival, Macao, has ascended on the back of great fortunes flooding into Asia – particularly China. Situated in the southeast corner of China, Macao now very much lives up to its name of ‘The Las Vegas of the Far East’. It’s not just its close proximity to new money that makes Macao such a pull, and its liberal attitude towards gambling (and, crucially, the source of gambling funds) is part of the reason why the world’s high rollers now come to Macao rather than the highly-regulated and perpetually curious casinos of Vegas – indeed, in 2012, Macau’s casinos made $38 billion, over six times as much as the whole of Vegas. 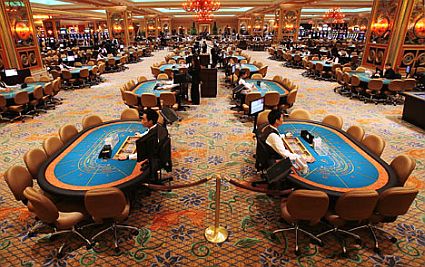 Of the casinos, the Venetian Macao is the largest – indeed, this is the largest in Asia. The sister of the Las Vegas version, it has sumptuous interiors and breathtaking views. There’s also 550,000 square feet of gaming and gambling – considerably more than that of even the MGM Grand. The Grand Lisboa is another huge building – reputedly the tallest in Macao – that has over 1,000 slots and 800 tables. Craps and poker are highly popular here. Macao may, in time, lose business to such places as its neighbour, Hengqin. Singapore, which could soon be the banking capital of the world, is also making great strides, and is eating into the lead of Macao and Vegas with astonishing sites like Marina Bay Sands and Resorts World Sentosa.